Microplastics (Figure 1) are fragments of plastic that are less than 5 millimeters (mm) in diameter. These can result from the breakdown of larger pieces of plastic or start as microplastics used in cosmetics, cleaning supplies, and clothing. Microplastics contain several types of plastic, including polyethylene, polypropylene, polyvinyl chloride, polystyrene, and polyethylene terephthalate, all which take longer than 5 human lifetimes to degrade. Accumulation of these pollutants in our terrestrial and ocean ecosystems have promoted bans for their use in cosmetics in the United States and the United Kingdom.

Problems with microplastics in the ocean

Microplastics and larger pieces of plastics are a huge problem for the marine environment. Plastics do not degrade easily and can spend hundreds of years in the environment. In 2010, 4.8 to 12.7 million tons of plastic entered the ocean (1) and plastics now make up 60 to 80% of marine litter (2). Previous studies on the effect of microplastics on corals saw that corals would eat, spit out, or keep the plastic particles in the individual coral polyps (3). This can lead to the coral having decreased feeding, energy, and/or reproduction (4). Microplastics can cause physical and chemical harm to the corals and can potentially transmit more pathogens (4). Additionally, all corals have an ability to clean themselves through ciliary action, mucus production, or tissue expansion to take care of natural or artificial particles that land on itself. However, microplastics could block that ability for the coral to clean themselves and cause further declines in coral health such as tissue necropsy or bleaching. 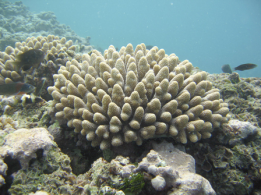 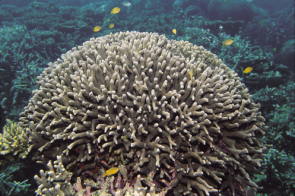 Figure 2: Examples of three of the coral species in the study. (a) Acropora sp., (b) Porites cylindrica, and (c) Pocillopora verrucosa. (Pictures from Wikipedia)

In Reichert et al (4), the authors took six species of coral (Acropora spp. Figure 2a, Porites spp. Figure 2b, and Pocillopora spp. Figure 2c) and ran a four-week lab study about the effects of microplastics on these corals. The corals were chosen because previous research has not tested small polyp size corals and all six species represented a range of small polyp corals. The aims of the study were to figure out how different species respond to microplastics and how the health of the corals would change due to microplastics. Nine specimens of each coral were taken and put in three 45 liter (L) tanks for the study, with one tank acting as a control and two for the experiment. After the corals adapted to the new environment (a span of 1-11 weeks), microplastic particles made of polyethylene were added to the treatment tanks at a concentration of 0.1 grams per L. This concentration is considerable higher than any naturally occurring levels of microplastics in the ocean and that was done by the authors to make sure the corals were more likely to interact with the microplastic particles. Temperature, water levels, alkalinity, daylight vs. night, and food concentrations were kept constant over the whole experiment. The response of the corals to the microplastic was measured through four ways: (1) attachment of microplastics to the tentacles or mesenterial filaments, (2) eating of the particles, (3) mucus production, and (4) growing over the microplastics. The health of the corals was determined by examining the corals for bleaching or tissue necrosis.

Corals response to microplastics (Figure 3a)

Both Acropora spp and Pocillopora spp had microplastic particles attached to their tentacles or mesenterial filaments (Figure 3b). The fact that these particles attached to these parts of the body could have led the corals to eat the microplastic particles (Figure 3c). If that did occur, the microplastic spent about 90 minutes before being removed from the digestive tract of the coral. However, 5.7% of eaten microplastics remained in the coral for at least 24 hours. This could have led to lower energy, higher toxin accumulation from the microparticle, and possibility of being passed on to other organisms that eat the corals. One species of Porites had increased mucus production that is associated with cleaning of the coral as well (Figure 3d). This could indicate the coral was trying to clean the particles off of itself. Lastly, Acropora and Porites species both showed growth over the microplastics (Figure 3e). This could lead to toxin accumulation and declined health as well in these corals.

Health of the corals

Reichert et al determined that microplastics cause differing responses in different coral species, but any exposure to microplastics leads to declines in the corals health. Further study needs to be considered with concentrations of microplastic particles that reflect levels seen in the oceans. More detailed results are needed for metabolism, energy, growth rates, reproduction, and survivability of any corals exposed.

2 thoughts on “Microplastics and Negative Implications on Coral Reef Health”